In our series on Anti-Money Laundering and Countering the Financing of Terrorism (“AML/CFT”), we continue this week by providing an understanding of individuals that are classified as ‘Politically Exposed Persons’ (PEPs). PEPs are categorised as potentially high-risk customers that receive particular attention under relevant international standards and guidelines such as the Financial Action Task Force (“FATF”) 40 recommendations. The FATF defines a PEP as “an individual who is or has been entrusted with a prominent public function”. Regulation 20 of the Financial Obligations Regulations 2010 (“the FORs”), defines a PEP as:

“(a) individuals such as the Head of State or Government, senior politician, senior government, judicial or military officials, senior executives of State-owned corporations and important political party officials who are or have been entrusted with prominent functions–

(i) by a foreign country; or

(ii) domestically for Trinidad and Tobago; 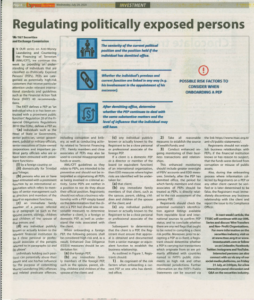 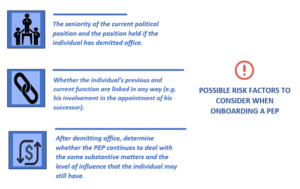